Assault on a Police Officer

According to the Code of the District of Columbia, misdemeanor assault on a police officer can include actions ranging anywhere from “opposing” to “assaulting” a law enforcement official. En Español.

The offense is considered a felony crime if the person performs any of the actions included in the misdemeanor charge and also causes significant bodily injury to the law enforcement officer.  To help defend yourself against the criminal charge, it would be helpful to contact a skilled Washington, DC assault on a police officer lawyer who can protect your best interests. There is a more detailed look at the laws surrounding DC APO here.

Assault on a Police Officer Charges in Washington, DC 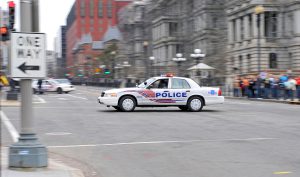 When hearing the word “assault,” many people think of physical aggression and violence against another person. However, when it comes to assault on a police officer (APO) charges, the definition is much broader. In fact, many actions most people would deem as merely “resisting arrest” are covered under DC law’s definition of assault on a police officer. Section 22-405 of the Code of the District of Columbia defines APO as:

Whoever without justifiable and excusable cause, assaults, resists, opposes, impedes, intimidates, or interferes with a law enforcement officer on account of, or while that law enforcement officer is engaged in the performance of his or her official duties shall be guilty of a misdemeanor and, upon conviction, shall be imprisoned not more than 180 days or fined not more than $1,000, or both.

Actively resisting arrest can result in a misdemeanor APO charge, conviction of which may result in jail time and a significant fine. However, if a person is accused of an assault on a police officer and that assault is a “violent act that creates a grave risk of causing significant bodily injury to the officer,” the defendant may be charged with felony APO.

As a felony, assault on a police officer is punishable by a maximum sentence of 10 years in jail and fines of up to $25,000. In addition to the harsh penalties of jail time and heft fines, the impact of having a misdemeanor or felony conviction on your record can cause long term problems in your personal and professional life. Many employers do not hire individuals who have been convicted of a misdemeanor or felony.

Whether you have been charged with APO as a misdemeanor or felony, it is important to retain qualified legal counsel as soon as possible to protect your rights and minimize the negative impacts that an assault on a police officer conviction would have on your life.

Defending Assault on a Police Officer Charges in Washington, DC

An experienced criminal defense lawyer will know that the prosecution must prove several elements in order to win a conviction for assaulting a police officer. They, at the minimum, must successfully show in a court of law that:

All of these elements must be proven beyond a reasonable doubt in order for the defendant to be convicted of assault on a police officer. If any of these actions or elements can be disproved, the APO charge may be dismissed.

An attorney with a history of defending assault on a police officer charges will have multiple defenses available with which to disprove the theories of the prosecutor. For general information pertaining to assault in DC, please visit the following page.

If you have been charged with assault on a police officer, Washington, DC criminal defense attorney David Benowitz can represent you in court and protect your best interests. He can carefully evaluate your case to explore several options for your defense and uncover the optimal strategy. David Benowitz is committed to providing his clients with quality legal services and skillful defense against misdemeanor and felony assault on a police officer charges in the District of Columbia.

Please contact us for more information or to schedule a free consultation. If you are seeking information or representation regarding APO charges in Maryland, visit our Maryland office’s website here.